Cova Tancada permalink
Transcribed from an old and faded printout, with map.

When driving to the Alcudia peninsula from Peurto Pollensa, in Alcudia go through the first set of traffic lights, at the second set you turn to go straight on, this is achieved by turning right then immediately left onto the Mal Pas road. This road is not signposted and is easily missed. At the roundabout (tree with a small wall around it) where the Bodaga Del Sol is, turn right and follow the road, it eventually becomes a track, carry on until you reach the hunting lodge, a white and yellow building, park here.

A track off to the right normally tapped (sic) off is followed up hill and into the open. The track then passes throught a wooded area, at a small dip a vague 'Y' where a track descends can be seen, go down and across the small stream (dry) follow the track to the cliffs and descend as the path dictates, there are steps in places, the cave entrance looks out over a beautiful turquoise sea. This old show cave is a very large chamber full of calcite, take your camera and <ends>

Having now visited the cave, it was well worth the walk and slightly difficult scramble down.

We walked in from the car park at the Campament de la Victòria, but there were cars that had driven up past the golf course and parked here: 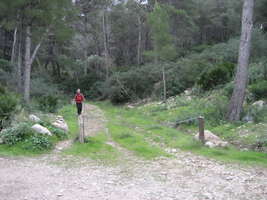 Follow the chained off track east as it rises, then bears round to the right and the slope eases. At this point, there is a footpath leading down to the left. The main track continues on, and is the one that is being followed in the opposite direction in the description in the previous post. Follow the footpath to the left. It goes round the head of a valley, crossing a dried up stream, then heads east towards the coast.

Eventually, it heads north and then descends north-east into another valley, crossing the dried up stream bed and then following the north side of the valley towards the sea. Then the path drops very steeply: at one point there are metal poles embedded in the rock with rope strung between them. See the photographs here, which include photographs inside the cave. The cave is in the cliffside, about 30m above sea level, at N 39.85406, E 3.19120 and is very well decorated. We went on to the end of the cave, where we could hear the noise of the sea down a small, muddy hole.

The cave was very warm and humid inside: don't wear heavy clothing. It's an old show cave, and there are no difficulties in getting through it.