Dodgy phone call from 07061 790526 permalink
Yesterday I received at least one (the second didn't show in the call register) phone calls from 07061 790526. The phone hardly rang at all - the call must have lasted less than a second. UK Phone Information says is is an "find me anywhere" number which is registered to Hotchilli Communications Ltd. Could this be a "missed call" scam as reported by The Register?

If your eeePC is stuck in an endless loop booting permalink
check to see how much disc space is left - if you have filled up the user part of the unionfs mount, the window manager won't start. In particular, check .xsession-errors in /home/user. If necessary, delete it and replace it with a read-only file owned by root.

Satcover and Satellite Direct told off by the Information Commissioner permalink

Mick Gorrill, Head of Regulatory Action at the ICO, says: "It is unacceptable for organisations to make unsolicited marketing calls to individuals who have said that they do not wish to be contacted in this way. If these organisations fail to comply with the terms set out in the formal undertakings, we will not hesitate to take further action."

3 July 2007
Following an investigation by the ICO, Satellite Direct UK Ltd and Satcover Ltd, both of Hove, East Sussex, were found in breach of the Privacy and Electronic Communications Regulations after making unsolicited marketing calls to individuals using an automated calling system. As a result the Information Commissioner has required the two organisations to sign formal undertakings to stop making unsolicited marketing calls to individuals.

I hereby give to the Information Commissioner a written undertaking pursuant to
Section 219 of the Enterprise Act 2002, that Satcover Ltd, in the course of any
business, in any way, by itself, its servants, or agents will refrain from the conduct
outlined below and any similar conduct namely:

Contravening Regulation 21 of the Privacy & Electronic Communications (EC
Directive) Regulations 2003 by using or instigating the use of a public electronic
communications service for the purposes of making unsolicited calls for direct
marketing to subscribers who have previously notified you that such calls
should not be made on that line, or to numbers allocated to a subscriber who
has registered with the Telephone Preference Service

IF YOU SIGN THIS DOCUMENT, YOU AGREE TO OBEY ITS
REQUIREMENTS. IF YOU CONTINUE TO BREACH THE
REGULATIONS SET OUT ABOVE THEN AN ENFORCEMENT ORDER
MAY BE SOUGHT FROM THE COURT. 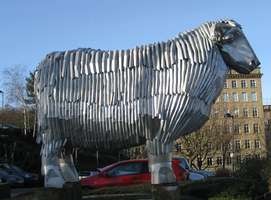 Is it a sheep? 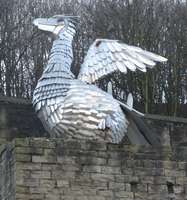 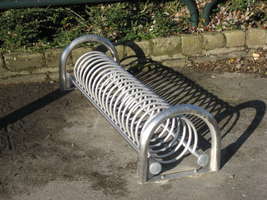 It's shiny, and useless - it must either be a work of art or a cycle parking farcility. 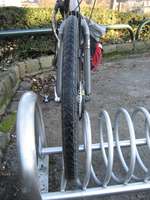 It "supports" this bike on the brake fixing on one side, and the spokes on the other.

In a bike with narrower tyres, and standard brakes, the wheel would just flop around. 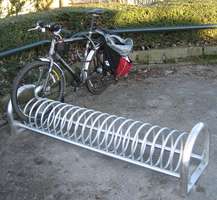 There is no way to lock the frame of the cycle to the structure.

This is what happens when artists choose things on their "shinyness" factor, rather than asking the local cyclists what they want (good old Sheffield stands). It's been imported all the way from Italy, BTW.


The Guardian reports that Satellite Direct have been found guilty of deceptive trading practices.

The judge used phrases such as blatant lie and A more obvious case of deliberate passing off would be hard to imagine.

Also, The Lawyer reports that the companies were found guilty of the unauthorised selling of service plans and warranties for satellite reception equipment using the "sky name"

Another blog on the subject: http://boakes.org/talk/tags/satellitedirect


For the RSS version of a Blosxom site, just add index.rss (or ?flav=rss) to the end of any Blosxom URL. /cgi-bin/blosxom.cgi/index.rss